So, the news broke this morning that Angry Robot is shuttering the Strange Chemistry and Exhibit A imprints, effective immediately.

What does this mean for Blackwood and The Woken Gods?

I suspect little in the short term, although if you've been procrastinating on buying them, now would be a good time. It also means I can finally answer all the people who ask if there will be a sequel to The Woken Gods. In some ways, this might make it more likely at some distant point down the road (Angry Robot/SC had an option). But I hope it will make plain why I didn't rush to try and do that project just now. Not that I knew this was coming, but I have been around the business a long time and I can’t say it came as a surprise either (the abruptness, yes). Ultimately, what I want is to write many, many books for you guys, and so I make career decisions based on that. Which brings me to the other question… 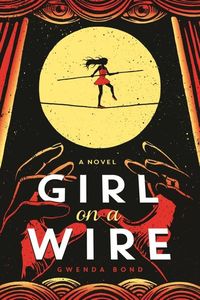 I really and truly am. I hope that Blackwood and The Woken Gods either stay in print and easily available, whether from Angry Robot or some eventual buyer of their list or parent company, or that the rights revert to me so that I can make sure they are.

But the book I'm most proud of that I've written to date is Girl on a Wire, and it'll be out this October. If you want to show me your support, put it on your radar, talk about it if you like it, preorder. And I have another project (Secret Project) that is close to being announced, I think. And there are several other things in the works I'm very excited about.

I will be fine. I'm among the least screwed in this situation.

I will be forever grateful to Strange Chemistry and Angry Robot for giving my career its start, and for the wonderful friends I met because I published there. I hope everyone lands on their feet — staff at the publisher, but most especially the amazing writers who were notified yesterday that their books are canceled, debut authors and people writing sequels or who had already written them, and those who were mid-series. Please support them, now and in the future. We can't afford to lose their voices.

Thanks to everyone for your good thoughts and concern today. All the love for that.

Edited to add: As expected, The Woken Gods and Blackwood will continue to be available for now from Angry Robot–there are apparently some potential buyers of the list in the mix, so we'll see how it all plays out and this is also when we read reversion clauses just in case. Thanks again for all the kind words and well wishes. Sign up for my quarterly or irregular for *big* newsletter, and you won't miss anything. <3

7 thoughts on “This Crazy Biz We Call Pub”