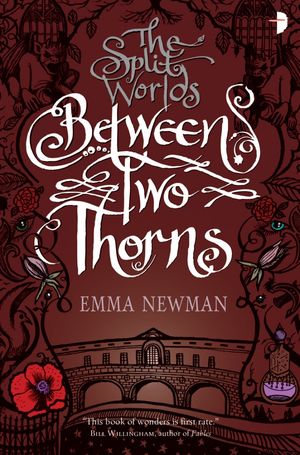 Today I'm bringing you something a bit different than usual, but undoubtedly a treat–a guest post complete with bonus story from the fabulous Emma Newman, set in the world of her forthcoming fantasy novels for adults with good taste. The first, The Split Worlds: Between Two Thorns, will be out soon (pretty cover to the right). I'll let her tell you what this is all about….

Emma Newman: In 2013 the marvellous Angry Robot books will be publishing three Split Worlds novels, the first is out in March and called "Between Two Thorns." This story is part of a crazy thing I decided to do before I got the book deal and was forging ahead with the project on my own: releasing a new story every week for a year and a day, hosted on a different site every time, all set in the Split Worlds. I wanted to give readers a taste of my kind of urban fantasy and have the opportunity to build in secrets and extra tit-bits for those people who, like me, love the tiny details. It's also been a major part of my world-building work alongside writing the novels.

This is the forty-second tale in the year and a day of weekly short stories set in The Split Worlds.  If you would like me to read it to you instead, you can listen here. You can find links to all the other stories, and the new ones as they are released here.  You can also sign up to get the stories delivered to your inbox, one per week for a year and a day.

The first part of this story can be read here or listened to here.

Story starts behind the cut tag:

Mickey's fingers twitched over the open pouch. The cherry red Ferrari gleamed in the afternoon sunshine. With only ten marbles, she had to choose wisely.

She picked one out, feeling its weight in the palm of her sweaty hand. She rolled the marble across the pavement fast enough to make it shoot off the edge and hit the rear tyre.

She frowned and looked in the gutter, but she couldn't see it. Perhaps it had rolled down the drain. Maybe she should have aimed at the car itself, rather than the tyre?

"Oi!" A middle aged man shouted from across the street. "Get away from my car!"

Mickey stuck a finger up at him and ran off, stopping a street away outside a game shop. She didn't want to give up hope yet. She knew there was something weird about these marbles.

She stepped inside, pushed past a cluster of spotty boys and went straight to the back shelf. A row of consoles triggered a familiar longing and she plucked another marble from the bag.

Mickey rolled the marble along the shelf. It hit the side of the PS3, but nothing changed. She retrieved the marble, noting it had lost its interior sparkle.

She stomped out of the shop, chucked the marble down the nearest drain and caught the bus home. She found her mother leaning against the back door, blowing her cigarette smoke out into the back yard.

She sighed and flicked the ash outside. "Well, it'll look pretty enough on the mantelpiece."

"I haven't got it," Mickey said. If she told her that she'd exchanged it for a bag of marbles that turned out to be as magical as a toilet brush, she'd get a hiding. "The bloke in the shop gave me a quid, I used it to get back home."

"Oh Mickey!" her Mum slapped her on the arm. "You're useless; you should've kept it and walked home!" She stubbed out the cigarette on the door frame and flicked the butt into the garden. "I'm goin' out, stay and look after Jack; I won't be back till tomorrow. And do the washing up for God's sake!"

She grabbed her handbag and left her with the scent of knock-off perfume and smoke.

"Where's Mum gone?" Her brother lurked at the door.

"You need to do the washing up."

Mickey looked at the dishes piled high in the sink. "Get lost." Then she had an idea. "Look," She fished the pouch out of her pocket. "If you do the dishes for a month, I'll give you this pouch of magic marbles."

Jack came over as Mickey pulled one out and held it up for him, sparkling and magnificent.

The boy's eyes were wide. Mickey smirked. When Jack reached for it, she pulled it away. "Washing up for a month, then they're yours."

Jack frowned. "How come you don't want them?"

Mickey drew in a breath, buying herself some time. "These marbles only work for sprats, like you. I'm too grown up for them. You roll one at whatever you want to have, and then it's yours."

"Cool. Do that lot in the sink and you can have the bag."

A loud pop woke Mickey early the next morning. As she opened her eyes, a terrible smash made her yell and sit up in bed.

The bedroom wall was bursting outwards, pushed by the red Ferrari parked at the foot of her bed. The bricks and plaster above the newly made hole rained down on its bonnet as the front wheels teetered above the front garden.

"Christ!" she scrabbled out of bed.

There were footsteps on the landing, then a second pop. She turned to see a brand new PS3 in the middle of her bed, price and security tags still attached.

Jack peered in and there was another pop. A kid's bicycle appeared next to the Ferrari, teetering for a moment before tipping to rest against the car door.

A fourth pop, and a large trampoline materialised a few feet above the bed before landing on it with a crash.

Jack jumped up and down. "My new trampoline!"

By the time the next pop came, Mickey was cowering in the corner. The dawn light was streaming through the hole in her wall and local dogs barked at the noise.

The marbles. Oh God the marbles were really-

A row of shop shelving appeared next, breaking the bed frame as it fell on top of it. Mickey dived for cover as it fell on its side with a crash, spilling hundreds of packets of sweets all over the demolished bedroom.

"Jack!" Mickey yelled. "What else did you roll them marbles at?"

The pop was the loudest yet, the room rapidly filling with a massive bouncy castle that Mickey had seen secured in a garden down the street. She was briefly crushed before the plastic was punctured on a sharp shelf corner and began to deflate.

Mickey scrambled across the car and ran to Jack's room as three more pops made him squeal. The pouch was partially tucked under his pillow. She grabbed it, feeling the last marble inside.

"Deal's off," Mickey said, retrieving clothes from the bathroom floor. "Get dressed, we need to go now, okay?"

"The police are gonna be here, then the Social, you don't want them to-"

She didn't have to finish the sentence. He was dressed in less than a minute and they ran out of the back door to avoid the crowd collecting at the front to gawp at the car. Now she knew what the marbles could do, she could change their lives forever.

Thanks for hosting, Gwenda!