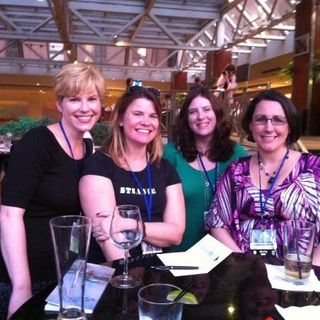 The delightful Kim Curran‘s Shift was one of my favorite books last year. It features teen Scott Tyler, who discovers he has the power to undo any decision he’s ever made — something that turns out to be more problematic than it at first seems. Just before Control, the sequel, was set to come out in August from Strange Chemistry, I asked Kim if she’d like to have a little conversation over email about the past year — our debuts and what it was like having a second book coming out, and all the fun and angsty stuff that goes along with that. We started almost immediately, but release seasons tend to get crazy, which is why you’re only getting this now. And, might I add, both our debuts are still on crazy sale in e-book (probably not for much longer).

That’s a photo of me and Kim (along with our fellow Strange Chemists Cassandra Rose Clarke and Julianna Scott) at WorldCon in Chicago last year.

Gwenda: So, you and I debuted at the exact same time, as the launch titles for Strange Chemistry. We exchanged many excited and panicked and commiserating emails, and even got to do an event together in Chicago. It’s hard to believe it’s been a year since that happened. Looking back from this lengthy vantage point (or you know, what feels like one), what came as the biggest surprise for you about publishing your first book?

Kim: Wow! How this year has flown. I remember that time so well: our increasingly panicked direct messages and emails as we got to know each other and realised that the idea of being published was driving us both a little crazy. Knowing you were there, strapped into the same amazing rollercoaster, was a huge reassurance and kept me sane. I couldn’t have asked for a better ‘book sister’.

As for what’s surprised me most, I guess it was the fear. I didn’t expect to be quite so terrified. You spend so long dreaming and hoping for this thing to happen. And yet when it does, it’s a mixed bag of excitement beyond anything else and abject terror! It feels very different this time around with book two. Calmer. More familiar. It’s a bit like falling in love: the first time is always the most intense. 🙂

How about you? How did you find the process? And how are you finding the idea of book two hitting the shelves?

(The rest of our chat continues behind the cut…)

Gwenda: I’m jealous that you’re calmer this time around — although I suppose am I too, even if it doesn’t feel that way getting right into the thick of pre-release time. But I completely agree with you, that it was so very lovely to have you as a sister-in-crime for this whole year, really. (And forever! You’re never getting rid of me, Curran. Deal with it!) Speaking seriously, though, it really does make such a difference to have writer friends to rely on and talk to.

I think the thing is, almost every writer I know, myself included, is something of a control freak. There’s a spectrum, of course, but we all are in the business of routinely taking things out of our brains and building them into whole story worlds that other people can walk into. And we go over draft after draft and round after round of revisions to try and get it just right. Then, the most magic thing of all happens, which is people visiting this story world you made and, especially when they enjoy it, there’s no more exciting collaboration that I can think of… But we mostly just have to hope that it happens — that our books find readers, and those readers enjoy them. So, that’s where I am, only starting to hear if The Woken Gods works for people, curious and a little worried whether people who liked Blackwood will like it too, and about the next one, and writing new stuff. Fear and hope are the writerly DNA strands.

Speaking of Control, that’s the title of your sequel. Do you want to give a teeny recap of the set-up from book one and then talk a little about what it was like writing a sequel? I still haven’t done that, so I’m very curious what it was like. 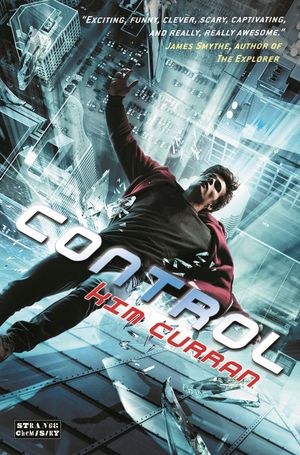 Kim: So, Control picks up six months after the events of Shift, and Scott and Aubrey have been busy tracking down the adult Shifters and bringing them to justice. There is just one last person to find: the mysterious Frankie Anderson. Although when Scott eventually tracks Anderson down, they’re not what they seem. It’s a darker book than the first, which was mostly about Scott learning to come to terms with his power. In this book, the powers that he once thought were amazing, start to lose their appeal. And he realises that rather than him controlling his reality, it’s starting to control him.

I wrote the first draft in about two months, as the deadline was crazy. And while that was stressful at the time, it seems to have worked. I simply didn’t have the option of freaking out about ‘book two’. And in many ways, returning to characters I love and a world I’d built was easier than starting from scratch with a new story. My greatest fear was that I would let anyone who had enjoyed Shift down. Thankfully, judging by the reviews so far, people seem to think it’s a better book than the first. And that’s all that I could have asked for.

It’s interesting what you say about writers being control freaks. I couldn’t agree more. And it’s no coincidence that Control is called just that. As in many ways, it’s about my own fight to learn to let go of things that are beyond my control. I’m still no good at it though.

How did you find writing your second book, knowing there was an audience waiting? And do you ever wish to return to the characters from Blackwood?

Gwenda: It was a terrifically hard book to write, and it was definitely a challenge to — for the first time — write something that was sold on proposal and that was promised to come out at a certain time. I have a much better sense of how I’d do things differently now. I learned so much writing that book. I think I’ve told you I had a couple earlier iterations of a many-gods-in-DC book that I’d set aside to write Blackwood. I just couldn’t make them work. When it came time to pitch book two, I knew I didn’t want it to be a sequel to Blackwood. While I always have ideas about what future books with any given set of characters might be like, I do feel Blackwood stands alone, and I didn’t want to sequel just to sequel. Which isn’t to say I’d never write one to it (and if I did, one word: Pirates!), but I have no plans to at this point. 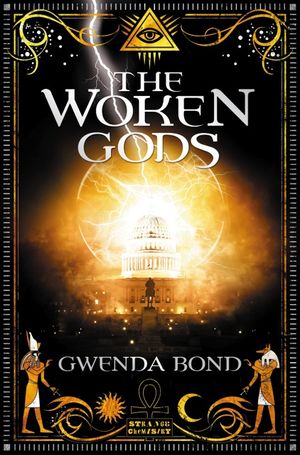 I was still really pulled by the idea of a more modern take on ancient mythology, an urban fantasy with a centuries-old society dealing with gods, and I figured that if I was willing to go back and start over after all the work I’d done already… Well, then, I needed to write this book. That said, crazy deadline and all, the first reboot I did still didn’t work. I wrote another book in the meantime while waiting for edits (which was Girl on a Wire, my modern circus book that will be out next year). And once I went back to The Woken Gods, I realized I, um, well, needed to rewrite the whole thing in first person present tense, with a few chapters in third person present to give glimpses of the other main characters in the book’s experience of the story. And I only had a few months to do it in. I hope to never quite find myself in that position again, but… I do think it worked, as you say, the time crunch ultimately led me to a better book. I don’t know if there will be sequels, but I do feel like there definitely could be, and that’s the feeling I wanted. I wanted to take the main character on a complete journey or at least a significant first stage of one, but for the world to feel much bigger and at a time of great flux, that it goes on beyond the last page. Mostly, I’m happy this version of the book exists. Now is the getting-the-word-out-that-it-does part. Which, as you know, is luck as much as anything.

I suppose it’s time for us to wrap this up, sister-in-crime. I know I can’t wait to see what’s up for you after the Shifter series ends, and thanks so much for the chat. Any last thoughts?

Kim: Thank you! This has been great fun. I can’t wait to see what an enormously bright future you have ahead of you. Just think, this is just the beginning!

You can find all the purchasing info for BLACKWOOD and THE WOKEN GODS right here on my site, of course. And here’s some handy links for book purchasing of Kim’s wonderful series: