Nova Ren Suma’s new novel, 17 & Gone, comes out this week (today, as a matter of fact), and to mark the release of this story about a 17-year-old girl haunted by the missing, she’s asked some authors she knows to join her in answering this question… What haunted YOU at 17? To see all the authors taking part, be sure to visit her blog distraction99.com.

(Because I'm trying to meet another deadline, I missed the deadline to get my post over to Nova for this. But here it is, anyway. Loving seeing all these, both there and elsewhere, so if you feel moved to contribute: please do and send her the link.) 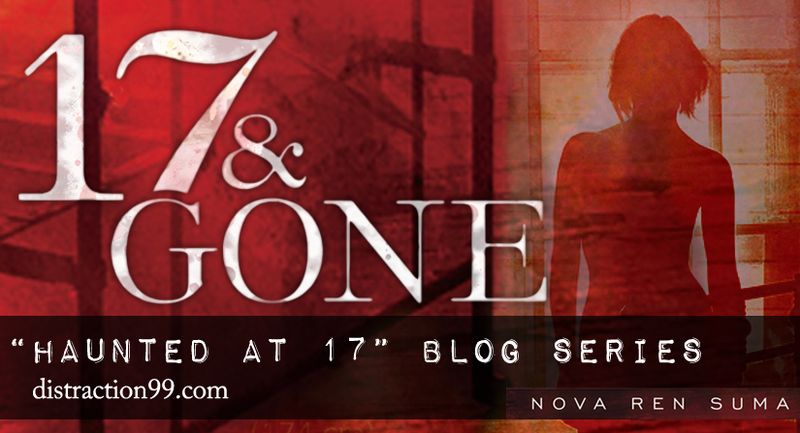 The Open Road & the End of the World

Every morning during my senior year, I drove into the school parking lot blasting R.E.M.'s "It's the End of the World as We Know It (And I Feel Fine)." And not just blasting it, singing along at the top of my lungs, especially on that parenthetical (you know I love a parenthetical). "AND I FEEL FINE!" I would shout it, as loud as I could in my terrible, abysmal, never-any-good voice, because it didn't matter, because there was no one there to hear. Car singing is the safest kind of singing, safer even than dancing around your room. It's you, moving through space, the music turned up so it obliterates your voice and even you don't care if you're off tune. You might still be able to hear yourself think, but you can't hear yourself sing. So: "AND I FEEL FINE!" Was it the truth?

When I say "every morning," what I really mean is every morning I went to school. Which–although my mom was principal (sorry Mom)–was way less than it should have been. I spent most of that year in a state of anxiety that was low and high at the same time, somehow, a special magic trick of anxiety that comes from knowing the world's about to end. Because it was. My world was about to end. Or, at least, to change.

And on the surface, I couldn't wait for that. I applied to colleges that people who worked at Sassy Magazine listed in their resumes (not kidding, this was the method to my madness), despite not wanting to go to college right away. I got into some of these, but reached a compromise with my parents that instead of taking a year or two off, I'd just go to a state school that wasn't too far away and then maybe transfer.

Because even though all I wanted was to circumnavigate the globe and then live in the city fantasyland I'd longed for since I was a kid, the exact opposite of the rural landscape where I grew up, the truth is, I got sideswiped by nostalgia and fear so strong that year the world might have actually been ending. What if the mushroom cloud showed up? Where else would I be safe but in the tiny bomb shelter in my grandparents' basement?

I'm overstating. Obviously. Though I was obsessed with possible nuclear holocaust; thank you, Douglas Coupland.

During my afternoons of school skipping, or after school on days when I hadn't skipped, my best friend and I would drive the twisty mountain roads and listen to music. We smoked cigarettes–not because we thought it was particularly cool and definitely not because we thought it was a good idea, but because we knew it was a bad one. Bad ideas and best ideas were hard to tell apart then. Stay out late, sneak in after coating yourself in hairspray to cover any giveaway scents of a wild evening, pore over issues of Ray Gun and racks of clothes at the Salvation Army but wear a shiny dress to prom anyway. Be super-political one minute, and like a Michael Crichton-character oversimplifying everything the next. A horror movie fan, an art movie fan. Read Salman Rushdie and Jim Morrison, Barbara Kingsolver and Hunter S. Thompson. So many identities, and I was determined to make them all fit together into…something. Into someone that people wanted to know.

But, mostly, my anxiety was that I would move through the world, the world after the one that was ending, alone. Forever alone. Too weird, too goofy, too whatever. I was desperate for my friendships to be real friendships. I remember one Saturday waking up and discovering from my parents–the parent rumormill fu, it is mighty–that said best friend and another friend had slipped out together with two boys (older very bad ideas who we sometimes hung out with) and had gotten caught and were now in big trouble. I would have given anything to be in that big trouble. Instead, there I was, wrapped in the knowledge that my friends kept secrets from me, that they had secrets with each other. That those afternoons driving on windy roads and singing along to Janis Joplin or Nirvana or Catherine Wheel or whatever we were into that day meant nothing, really.

I was alone, and I would be alone forever. There must be something about me that made them not tell me everything. And wouldn't the rest of the world after be just the same? Always shutting me out of the best parts?

Part of me was ready for that world to end, could wait for nothing more than what came next, was constantly thinking, please, end already, get me out of here. But by the time graduation rolled around, I wasn't ready. I was still trying to find my way into those secrets, to hold onto those doomed friendships and make them work somehow, to keep a foot in the old world, just in case… The compromise school was another symptom of that.

And, then, at some point, a year or two later, I realized I was caught in an undertow and that it would take me down. Down. Back. The same thing. The same place. The old world. And I understood that even if I had to be alone, that's what I had to do. That world would end for me, finally. And I? I'd feel fine.

It was only after I gave up on trying to make those false connections work that I found real ones. That I discovered that the old world might never have felt right, but the world now did (mostly). That there were people who I wouldn't have to play games with, unless we were playing games for fun. That there were people who I would be friends with, would fall in love with, and not wake up to find out I'd been on the outside looking in at those relationships the whole time. That instead of twisty roads, I'd finally end up on the one we were looking for all along. The road that goes somewhere, singing along–loud, still loud–to Jim White doing "King of the Road."

But I am still haunted by that seventeen-year-old girl, the one who would have given anything to be in trouble because the alternative was being left out, her having awkward conversations where it was clear how little she knew about what was going on. I want to pull her aside and tell her to not worry so much, to be as weird as she feels like. Someday these great betrayals will be the thinnest of ghosts. Nothing to worry about. I'm certain she wouldn't listen.

Now, off you go, to visit Nova at distraction99.com.