Reviews for The Woken Gods

The A P Book Club: “I’m always looking for a book where ancient mythologies are blended with contemporary settings. Take the Percy Jackson series. I loved those books, and I was kind of really excited to see that this was a book for fans of them. But honestly, I think Bond does it so much better. So I would definitely recommend this to anyone looking for something along the lines of Percy Jackson, but maybe a little more complex and a lot darker.”

Bibliotropic: “Between the diverse cast of interesting characters, the creative plot, and the engaging writing style, The Woken Gods has a guaranteed place on my shelves for a long time to come. YA fans who enjoy a departure from standard material, female protagonists who can stand on their own two feet, and a wild creative ride will do well to check this one out.”

Bookslut: “The Woken Gods is a fast-paced tonic for curious readers who seek multi-layered mysteries and a salute to smart under-appreciated kids everywhere. The cool part is when it all comes together at the end and some very delightful parents do step up to the plate because they trust their kids. Bond has her characters growing up in a strange new world, in a bold brave way. The Woken Gods is one mighty fun read, and thus a perfect respite from holiday madness. Smart equals good in any adventure, and this is a very good read.”

Bull Spec Magazine: “This is an exciting urban fantasy adventure which hopefully will get further volumes.  The characters are engaging and the setting familiar but with strange twists. One of the most enjoyable young adult contemporary tales set in the US that Your Humble Reviewers have read in a long while.”

The Founding Fields: “A great, fast paced and fun novel that puts a new spin on the ‘Gods Are Real’ storyline that fans of the Percy Jackson series and other similar titles will love. … Kyra’s character is strong and awesome, and when this book hits shelves next month, you should certainly pick it up if you can. Young Adult readers will love this one.”

Ink Scratchers: “I can’t recommend The Woken Gods enough, the world, the writing, the action and the characters are all so awesome. This is a unique concept that you have to try even if you aren’t a fan of the YA mythology genre. This book is political thriller mixed with mythology which doesn’t sound like it should work… yet strangely they go together like cookies and cream.”

Locus Magazine: “This YA fantasy opens five years after the ancient gods—from all sort of pantheons—have reappeared.  … Her stubborn search for her father becomes a surreal trip with some loyal friends through a chaotic city where gods and oracles all want something. It’s a fun adventure made particularly intriguing by encounters with some unusual deities…” Also: Locus 2013 Recommended Reading List.

Kate Ormand: “The Woken Gods is a captivating story of secrets, mysteries, lies and adventure, blending rich mythology with a contemporary setting. I’d recommend to fans of Neil Gaiman, Zoë Marriott and Cassandra Clare. I was already a fan of Gwenda Bond after reading her debut novel, Blackwood.”

Megan Likes Books: “The Woken Gods is a great book for any mythology buffs or fans of race-against-the-clock action stories. Or cute boys who know how the make the decision between following orders and following the truth.”

SFF World: “Bond does a lot of things well in her second novel. Her pacing is as brisk and frenetic as in her previous novel and her characters, particularly the protagonist Kyra, is far more than simply the ‘plucky, clever girl.’ Kyra’s emotions come across very well; her urge to help her father, the conflict she feels over Oz, and the fear she has for her friends. I empathized and believed in her as a character and felt for her plight.” Recommended.

SF Signal: “In addition to Kyra as a character, the other feature of The Woken Gods that really stands out to the reader is its creative use of mythology. Before reading it, I had expected the usual suspects of Greco-Roman mythology, or perhaps, if I was fortunate, a Norse goddess or two thrown into the mix. … To my surprise and delight, the gods we see in The Woken Gods are none of the usual suspects.”

Tor.com: “The concept of Woken Gods had me hooked from the start—I love mythology, and the idea of the gods “waking up” and returning to the world makes for a great premise. … If you like mythology and fast moving YA novels with decisive and strong female protagonists, The Woken Gods might just be for you.”

Return to The Woken Gods 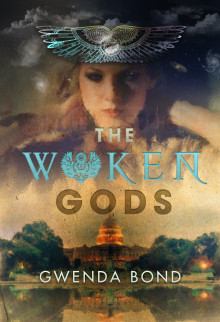